The other morning I came downstairs and smelled something awful. I went down into the bar and wouldn't you know, the bar was backed up again. I had finally had it, this had gone on too long. I decided to get it fixed. I called a new plumber that a lot of my neighbors use and recommend and decided to get a bid for the job. Jeff Drew, the owner of Drew's Plumbing, came out to perform the bid himself. He came in $200 less then anyone else and after all of my neighbors praises, I scheduled them to get started at 8 am the next morning.

7:23 am my dogs start going crazy. The plumber's are there and ready to work. First they go into the bar and try putting the snake down the large drain in the floor. While they do get a lot of incredibly nasty looking stuff out, it still refuses to drain. So out to the front yard we go. They dig down about 6 feet and found the main cleanout.

Now back in 2007 I had one of my neighbors, who was a retired contractor, landscape my yard for me. Part of the details on our contract included repairing the main cleanout when they were laying all the new irrigation. Imagine my surprise when they dug up the pipe and found that the house was not connected to the sewer!!! Yes, you read that right. The pipe was broken off about 2 inches past the foundation and filled with dirt and debris. Then about 2 feet accross from that, the pipe to the sewer was capped off. That means not only did my neighbor not repair the main cleanout which he charged me for, he also failed to tell me that for the last 4 years, my home has not been connected to the sewer, which obviously raises a ton of other concerns such as, "Do I have a big sink hole of crap under my house."

So the plumbers took the cap off the main sewer line, chipped away the bad pipe coming out of the house, rebuilt the main cleanout and set it slightly above ground for easy future access and snaked all my pipes. Now they were here probably 2 hours longer than planned and ended up doing much more than they originally expected. So I get my invoice, time to pay and OMG!!! it is EXACTLY what I was quoted.

Not even 2 weeks before I paid more money to have my bathroom sink repaired because parts broke while repairing it and instead of taking 1 hour it took 4, which was the plumber's fault. (He ended up having to replace the sink stop and 2 pipes under the sink because he dropped a seat down the drain and when he went to get it out he broke it.) I was originally quoted $250 and paid almost $800 for his mistake!

So imagine my surprise when I was billed exactly what I was quoted. Drew's Plumbing will definitely be handling ALL of our future plumbing needs (which are plenty) and I would highly recommend them to everyone. I now have a bar that drains properly and my plumbing flows like a champ. Now to find out where everything has been going for the last 4 years.

I am happy to report though, I can now check main clean out off our list! 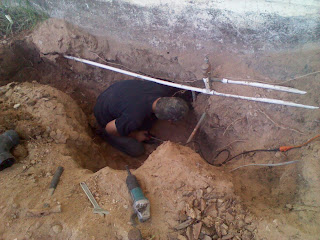 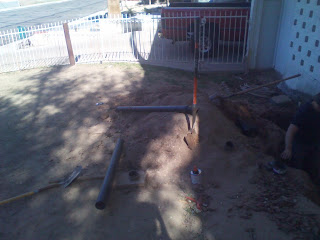 Quit the Rat Race Today
Posted by Teri at 3:05 AM No comments:

Photobucket, why do you hate me?

I was planning on posting an update a couple of days ago with pictures. My plumber is going to be back out and I only got part of the ceiling in the living room scraped, but it was still some progress and every little bit is a step in the right direction. Unfortunately when I went to upload the pictures of the progress, photobucket rejected me! :( So I am going to find out why it will not let me upload my pictures and then I will fix the problem and get them posted and be a happy little girl again.

On today's menu, I am baking some tasty Apple Spiced bread to power me through.....cleaning out the downstairs closet, ripping out the carpet in the downstairs closet, removing the old alarm wiring from the downstairs closet and piano room, and removing the ceiling from the piano room. I know that last one sounds like a lot but from replacing plumbing almost a 1/3 of it is already down and I still need to get all the electric in that room replaced so it will be easier and it will look better to take the whole ceiling down, fix the electric and install the PEX and then re-hang a new beautiful ceiling. Stay tuned for pictures from the other day and an update tonight after my hard days work!
Posted by Teri at 2:05 PM No comments:

I am not even going to get into all the reasons it has taken me so long to update this blog. I thought about dedicating a blog post to it but really, does it matter? I have just not had the time, for various reasons, and now I do. That simple.

So anyway, in the last couple months since my last post I have done some little projects around the house. The sprinkler system in the front yard has been repaired and is now working. Of course then I came across this article about having a drip system for your lawn. Not only is it more water efficient, but you don't have to deal with gardner's (or dogs) breaking sprinkler heads on a regular basis and apparently your grass gets more water then above ground watering gives it.

Also just discovered a "new" plumbing material called PEX. After weeks of research as well as comparing it to the PVC I was going to replace all my old plumbing with, I have decided to get the house replumbed with PEX. I am excited because not only does it take less time, it is guaranteed for 25 years and it takes half the time to install and costs 60%-70% less! Yay! My favorite plumber in the world is coming over tomorrow to fix a couple of quick leaks for me and is going to walk through the house with me so I can get the plumbing done next month.

Mostly I've just been doing a lot of research the last couple of months and making a lot of contacts with people that are, and are going, to be working on my house and the things in it. Also next month I am going to start taking one piece of furniture at a time to get it restored. Well one piece as far as a whole set of the same piece. I have a ton of antique Rattan furniture that just from the dry hot desert and being so old, needs to be repaired and touched up.

The new finish date for the house to be completely done, 100%, is Jan. 1, 2013. I am going to be doing a few other projects around the house tomorrow while Mark is fixing the plumbing so I will make sure that I post some pics as well as a couple more articles!

Home Remodel on a Budget

Home Remodel on a Budget

A great article on staying on budget while doing your remodel. While remodeling is never cheap, there is nothing worse than budgeting for your remodeling and then coming up short, sometimes WAY short. Here are some simple tips to help your remodel go as smooth as possible when it comes to paying for it.

Quit the Rat Race Today
Posted by Teri at 1:57 PM No comments:

Attack of the Plumbing

I know it has been a couple of months since I have updated but I have been so busy with my business I have spent more time making money than doing work on the house. That unfortunately is catching up with me. I came downstairs a couple of mornings ago after my shower to discover this:

It is my bar, and it is flooded with all sorts of nasty moldy stuff, stuff being code. I have had this problem in the past, Roto Rooter has come out multiple times to snake the drain, but here is the problem. The drain is not clogged. The problem is that when I had my landscaping done a few years back, the main clean out was knocked down and broken and so now depending on the weather, this drain will randomly back up.

The worst part is that everything backs it up! All the toilets, all the showers, the laundry, the dishwasher. Every bit of water that gets used, is backing up in my bar. So disgusting! It looks like this is going to need to get done this next week. Which means digging up the yard to put the new clean out in. But the nice thing is that for $1000 I not only get a new main clean out put in, they also snake EVERY line in the house to make sure everything is draining properly. Of course according to my landscaping receipt, $600 was supposed to go toward moving the main clean out. Oh well, It is worth it to never have you know what floating in my bar again!

Quit the Rat Race Today
Posted by Teri at 2:54 PM No comments: